Paths from Mother-Child and Father-Child Relationships to Externalizing Behavior Problems in Children Differing in Electrodermal Reactivity: a Longitudinal Study from Infancy to Age 10 | mijn-bsl Skip to main content
ZOEKEN MENU 1 2 3 4

Electrodermal hyporeactivity (or low skin conductance level, SCL) has been long established as a correlate of and diathesis for antisocial behavior, aggression, disregard for rules of conduct and feelings of others, and generally, externalizing behavior problems in children and adults. Much less is known, however, about how individual differences in children’s SCL and qualities of their early experiences in relationships with parents interact to produce antisocial outcomes. In a community sample of 102 families (51 girls), we examined children’s SCL, assessed in standard laboratory tasks at age 8 (N = 81), as a moderator of the links between parent–child socialization history and children’s externalizing behavior problems at ages 8 and 10, reported by mothers and fathers in well-established instruments and by children in clinical interviews. Mother- and father-child socialization history was assessed in frequent, intensive observations. Parent–child mutually responsive orientation (MRO) was observed from infancy to age 10, parental power assertion was observed from 15 months to age 6 ½, and children reported their attachment security in interviews at age 8 and 10. For children with lower SCL, variations in mothers’ power assertion and father-child MRO were associated with parent-rated externalizing problems. The former interaction was consistent with diathesis-stress, and the latter with differential susceptibility. For children with higher SCL, there were no links between socialization history and externalizing problems.
vorige artikel Relations of Growth in Effortful Control to Family Income, Cumulative Risk, and Adjustment in Preschool-age Children
volgende artikel Differential Risk for Late Adolescent Conduct Problems and Mood Dysregulation Among Children with Early Externalizing Behavior Problems 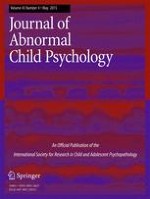 Moderating Effects of Brooding and Co-Rumination on the Relationship Between Stress and Depressive Symptoms in Early Adolescence: A Multi-Wave Study

Variants of Girls and Boys with Conduct Disorder: Anxiety Symptoms and Callous-Unemotional Traits

An Emotion-Focused Early Intervention for Children with Emerging Conduct Problems

Neuropsychological Heterogeneity in Preschool ADHD: Investigating the Interplay between Cognitive, Affective and Motivation-Based Forms of Regulation