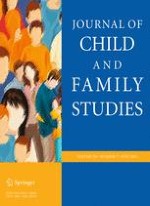 The Incredible Years Series: A Review of the Independent Research Base

Autonomous and Controlled Motivation for Parenting: Associations with Parent and Child Outcomes