Mindfulness-based cognitive therapy (MBCT) groups are challenged by high attrition particularly in early sessions. This leads to disturbances in the composition of the groups and potential dissatisfaction. In order to support patients in their decision about participation and to accommodate the program to psychiatric patients, an adapted version of MBCT was developed with nine instead of 8 weekly units, reduced duration of some exercises, and patients invited to make an active decision about continuing with the program or leaving the group after an introductory phase of the first three sessions. 120 participants joined the program, 35 % decided to leave the program before the advanced stage started, and 50.8 % completed it. In a multiple logistic regression model, neither the degree of depression and mindfulness at onset nor sociodemographic variables could predict if participants would complete the program. The only significant predictor was the number of sessions attended in the introductory phase. In bivariate analyses, having participated in group therapies earlier strongly predicted if a person would complete sessions 1 to 3. The therapist’s assessment of the patient’s motivation and her/his predictions if the patient would leave the group preterm and if the patient would finalize the program regularly were also related to attrition. The modified version of MBCT has proved to be feasible and useful to stabilize the participants’ presence in the later sessions. Particular attention should be paid to patients who miss sessions in the introductory phase and for which the therapist recognizes low motivation or risk of dropping out.
vorige artikel The Influence of Mindfulness on Different Aspects of Pain Perception and Affective Reactivity to Pain - Feasibility of a Multimethodical Approach
volgende artikel Associations Between Mindfulness, Lightheartedness, and Inner Correspondence in Yoga Practitioners 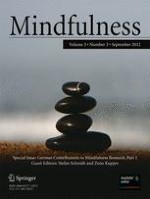 The Effects of Mindfulness Meditation: A Meta-Analysis

A Serialization of Coming to Our Senses