One hundred and sixty-seven Mexican–American fifth graders (91 females, 54.5%) took part in the first phase of the study, as part of a larger longitudinal study of economic stress in Southern California (Parke et al. 2004). All participants were from dual-parent households, which included two biological parents of Mexican descent. The adolescents had attended school in the US for 5 years. Adolescents were followed annually for 3 years. At 7th grade, 33 (19.76%) adolescents were not located or refused to participate in the additional phase of the study, leaving a sample of 134 adolescents (54.5% females). There were no significant differences in the study’s measures between those who participated in the 7th grade phase and those who did not (all ps ≥ .41 except for depressive symptoms, for which p = .07).
At the time of initial recruitment, the mean age of the 134 adolescents who participated in fifth and in seventh grade was 10.83 (ranging from 10 to 13, SD = .63 in years), mothers’ mean age was 37.27 (ranging from 26 to 54, SD = 6.05), and fathers’ mean age was 38.75 (ranging from 26 to 56, SD = 5.93). The average total family income was $35,337 (SD = 25,039.01). In 24 families (17.9%), adolescents and both parents were born in Mexico. In 72 families (53.7%), adolescents were born in the US and both parents were born in Mexico. In 38 families (28.4%), the adolescent and at least one of the parents were born in the US.

Interviews were held at a campus research center and at several alternate sites closer to family residences, including schools and community centers. When the adolescents were in fifth and seventh grade, they completed an identical series of questionnaires. Families were paid $200 for participation in each phase of the study.

All measures were available for participants to respond in English or Spanish. The Spanish questionnaires were translated into English and then back-translated. Only 8 adolescents (6%) chose to respond in Spanish.

To assess adolescents’ perceptions of their parents’ promotion of psychological autonomy and psychological control, the Block Child Rearing Practices Report (CRPR; Rickel and Biasatti 1982) was used. The CRPR includes 58 items, tapping various parenting practices. Adolescents responded to the CRPR twice, once reporting on their perceptions of their mothers’ practices, and once referring to their fathers’ practices. Studies of Hispanic families have usually reported good internal reliability and construct validity of the CRPR scales (Ceballo and Hurd 2008; Dixon et al. 2008; Ferrari 2002).

We extracted a new scale from the CRPR, which included 5 items, and which reflected parental encouragement of adolescents’ self-expression (e.g., “My mother respects my opinions and encourages me to express them”) and of adolescent’s self-exploration (e.g., “My father encourages me to be curious, to explore, and to question things”). The items were chosen based on their resemblance to items used in extant measures of promotion of psychological autonomy (e.g. Bean and Northup 2009). The adolescents were asked to rate their perceptions of each parent’s promotion of psychological autonomy using a Likert scale ranging from 1 (“Strongly disagree”) to 5 (“Strongly agree”). Items were averaged, and a higher score reflected perception of more promotion of psychological autonomy. Since we did not have specific hypotheses regarding the perceived practice of each parent, and since we found high correlations between perceived maternal and paternal scores (r = .55, p = .000), we aggregated them by calculating their mean (Cronbach alpha of the scale was .78).

We extracted a new scale from the CRPR, which included 11 items, reflecting anxiety and guilt induction (e.g. “My mother controls me by warning me about the bad things that can happen to me”); love withdrawal (e.g. “When my father is frustrated with me, he sometimes ignores me for a while”); and pressuring the adolescent to feel and behave according to the parents desires (e.g. “My mother does not allow me to get angry with her”). The items were chosen based on their face validity, i.e., their resemblance to items used in extant measures of psychological control (e.g., Plunkett et al. 2007; Silk et al. 2003). Also, a previous study of Hispanic mothers of 4th to 5th graders, mostly from Mexican–American backgrounds (Ceballo and Hurd 2008), used a similar psychological control scale, which was also extracted from the CRPR. The study documented good internal reliability of the scale (alpha = .76), and provided support for its validity for Hispanic samples, by showing that more acculturated mothers tended to report less use of psychological control.
The adolescents rated their perceptions of psychological control of each parent using a Likert scale ranging from 1 (“Strongly disagree”) to 5 (“Strongly agree”). Items were averaged, and higher scores reflected perception of more psychological control. Since we did not have specific hypotheses regarding perceived psychological control of each parent, and since we found high correlations between maternal and paternal scores (r = .50, p = .000), we aggregated them by calculating their mean (Cronbach alpha of the scale was .77).

The Global Self Worth Scale (GSW) from The Self-Perception Profile for Children (SPPC; Harter 1985) was used. The SPPC is a well-standardized measure for assessing self-worth in adolescence (Muris et al. 2003). The GSW provides a measure of a child’s global judgment of her/his own worth as a person. It includes 6 items, each consisting of two opposite descriptions (e.g., “Some kids are often unhappy with themselves” but “Other kids are pretty pleased with themselves”). Respondents chose the description that best fit them and indicated whether the description was “really true” or “sort of true”. Accordingly, each item was scored on a 4-point scale with a higher score reflecting a more positive self view. Items were averaged to create a global self-worth score. The GSW was used in studies of Mexican–American adolescents, demonstrating good internal reliability and construct validity (Hess and Petersen 1996; Michaels et al. 2007; Schmitz 2006). For our sample, the scale showed good internal reliabilities (α = .72 and α = .83 in 5th and 7th grade respectively).

Adolescents completed the Child Depression Index (CDI; Kovacs 1985). The CDI is a 27-item scale that assesses affective, cognitive, and behavioral symptoms of depression. For each item, adolescents chose one of three statements that best described their symptoms during the past 2 weeks (e.g. “I am sad”; “I feel like crying”) on scales ranging from 1 to 3, with higher score indicating more depressive symptoms. An item on suicidal ideation was excluded from the study because of ethical concerns. Therefore, adolescents responded to 26 items which were averaged to create a depressive symptoms score. The CDI has been used in studies of Mexican–American adolescents, demonstrating good internal reliability and construct validity (Love and Buriel 2007; Molina et al. 2009). For our sample, the CDI showed good internal consistency (α = .80 at both 5th and 7th grade).

Adolescents completed the short version of the Delinquent Peer Association Scale (Stoolmiller 1994), which includes 7 items tapping delinquent behaviors on the part of the adolescents’ friends. Adolescents rated how many of their friends have conducted delinquent behaviors during the last year using a scale ranging from 0 (“none of them”) to 5 (“all of them”). Items included, for example, “stolen something worth more than $50”, and “suggested you do something that was against the law”. Items were averaged to create a scale of the mean number of delinquent friends. The scale was validated in a longitudinal study of 4th to 8th grade boys, mostly from a European American background (Stoolmiller 1994). For the current samples, Cronbach alphas were .74 and .79 in fifth and seventh grade respectively.

The Short Acculturation Scale for Hispanic Youth (SASH-Y; Barona and Miller 1994) was used. The scale includes 12 items regarding use of English and Spanish (e.g. “What language do you usually think in?”) and preferences for social relations (e.g. “My close friends are _______”). Adolescents responded to the social relations items on a scale ranging from “All Latinos” (1) to “Only non-Latinos” (5), and responded to the language-related items on a scale ranging from “Only Spanish” (1) to “Only English” (5). A global acculturation score, based on averaging 12 items was constructed. Higher scores reflected greater acculturation to English speaking society in the US. The SASH-Y has shown good internal consistency, split-half and test–retest reliabilities among Hispanic adolescents (Barona and Miller 1994; Serrano and Anderson 2003) and has been cross-validated across samples (Serrano and Anderson 2003). In our sample it showed good internal reliability (α = .83).

Simple correlations of predictor and outcome variables are presented in Table 2. More acculturated adolescents reported fewer depressive symptoms at the two time points. Perception of more promotion of psychological autonomy was associated with higher self-worth at 5th grade and with fewer delinquent friends at 7th grade. Perception of more psychological control was associated with more depressive symptoms at the two time points.
Hierarchical regression analyses were conducted next to examine whether perceptions of parenting practices in 5th grade were predictive of adjustment in 7th grade after controlling for background variables and for adolescents’ baseline adjustment in 5th grade. These analyses also enabled the examination of the moderating role of adolescents’ acculturation. Three regression analyses were performed, one for predicting self-worth in 7th grade, one for depressive symptoms in 7th grade, and one for number of delinquent friends in 7th grade. In each regression equation the following variables were included. Block 1 included adolescents’ gender, family income, acculturation level, and the relevant 5th grade adjustment measure (e.g., self-worth in 5th grade was included in the regression equation predicting self-worth in 7th grade).
In light of the positive correlation found between the two parenting practices, in order to examine the unique roles which perceptions of promotion of psychological autonomy and perceptions of psychological control played in adolescents’ adjustment, we included both in the same regression equations rather than analyze separately the links between each parenting practice and adjustment. Thus, Block 2 included perceptions of promotion of psychological autonomy and perceptions of psychological control in 5th grade. To examine if acculturation moderated the links between parenting practices and adolescents’ adjustment, Block 3 included the interactions between each parenting practice and acculturation in 5th grade.2 In all analyses, parenting practices and acculturation were centered to reduce problems of collinearity. Interaction terms were constructed based on centered scores (Holmbeck 2002). When an interaction term significantly predicted adjustment, it was analyzed further by examining the relevant simple slopes (Schubert and Jacoby 2004). Because there were moderate to high correlations between some of the variables, the regression models were checked for multicollinearity. The examination of the Tolerance values for each independent variable did not reveal signs of multicollinearity, as the smallest value found was .71. 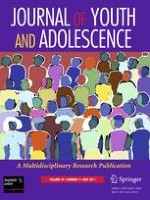 Ethnic-Racial Socialization and Adjustment Among Latino College Students: The Mediating Roles of Ethnic Centrality, Public Regard, and Perceived Barriers to Opportunity