Psychological control is a pattern of parenting that is intrusive and manipulative of children's thoughts, feelings, and attachment to parents. Although little is known about the determinants of psychological control, it has been linked to the psychological status of the parent. We hypothesized that several parenting cognitions reflecting personal concerns would be associated with the use of psychological control: low perceived control, sensitivity to hurt, and a disapproving attitude to negative emotion. We also examined moderating associations with child temperament and child gender. Participants were 198 mothers and fathers of 3- and 4-year-olds (106 boys, 92 girls; M age = 4.10 years, SD = 0.26). Parents completed self- and spouse-report measures of psychological control, rated their child's temperamental characteristics, and completed measures of parenting cognitions. Predictions were generally supported for two of the three cognitions. Sensitivity to hurt and disapproval of negative emotion were associated with more frequent reported use of psychological control. There were some moderating effects of child characteristics.
vorige artikel Family Strain and Adolescent Delinquency in Two Chinese Cities, Guangzhou and Hong Kong
volgende artikel Effectiveness of a Parent Training Program for Improving Children’s Social Behavior 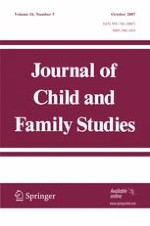 A Review of Childrearing in African American Single Mother Families: The Relevance of a Coparenting Framework

Cross-Validation of the Behavioral and Emotional Rating Scale-2 Youth Version: An Exploration of Strength-Based Latent Traits