» Toegang tot de volledige tekst krijgen
This study examined the role of parents’ current and former smoking in predicting adolescent smoking acquisition stages. Participants were 7,426 students from 33 schools in the Netherlands. Participants’ survey data were gathered at baseline and at two-year follow-up. Logistic regression models showed that parental smoking status was not only predictive of transitions from never smoking to trying smoking, monthly smoking, or daily smoking, but also of the progression from trying smoking to daily smoking. Further, although parental former smoking was weaker associated with progressive adolescent smoking transitions than current parental smoking, however absence of parental smoking history was most preventive. Compared to the situation in which both parents had never smoked, cessation of parental smoking after the child was born was associated with an increased risk for children to smoke. Adolescents living in a single-parent family were at greater risk of smoking than adolescents living in an intact family with both mother and father. In sum, the role of parental smoking is not restricted to smoking onset and is present throughout different phases of the acquisition process. Results support the delayed modeling hypothesis that parental smoking affects the likelihood for children to smoke even when parents quit many years before. Children living in single-parent families are only exposed to the behaviour of one parent; in two-parent families the behaviour from one parent may magnify or buffer the behaviour of the other parent. 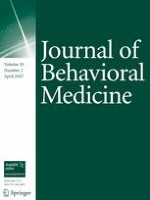 The Relationship between Vigorous Physical Activity and Juvenile Delinquency: A Mediating Role for Self-Esteem?

The Association of Illness Severity, Self-Reported Cognitive Impairment, and Perceived Illness Management with Depression and Anxiety in a Multiple Sclerosis Clinic Population

Pessimism and Physical Functioning in Older Women: Influence of Self-Efficacy