This study compared parents’ retrospective reports of their involvement in infant settling strategies and their relation to current sleep patterns among children (N = 84, ages 7–11) with generalized anxiety disorder (GAD) and healthy controls. Parents of children with GAD were significantly more likely to report rocking their infants to sleep and putting infants down when they were already asleep than parents of healthy controls, even when accounting for infant health-related factors and parental anxiety. Greater involvement in infant sleep routines also predicted sleep patterns (measured via actigraphy) during childhood, though opposite relationships were observed in the two groups. Early involvement was related to poorer sleep in control children but better sleep for children with GAD even after controlling for current parenting practices. Findings suggest differential effects of early sleep-related parenting for children with and without later anxiety disorders with possible implications for early intervention. 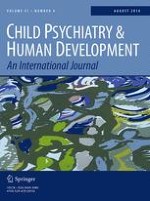 Mental Health Problems Among Preschoolers in Germany: Results of the BELLA Preschool Study

Primary Versus Secondary Diagnosis of Generalized Anxiety Disorder in Youth: Is the Distinction an Important One?

Are Callous-Unemotional Traits Associated with Conflict Adaptation in Childhood?

The Impact of Tic Severity, Comorbidity and Peer Attachment on Quality of Life Outcomes and Functioning in Tourette’s Syndrome: Parental Perspectives