The development of aggressiveness between 5 and 17 years and some parental influences on this development were analyzed using data from Germany. International studies have shown a “camel humps” curve, i.e., a peak of aggression of children (primarily boys) between 2 and 4 years and a second peak of antisocial or aggressive behavior of boys between 15 and 20 years, but small groups of children and adolescents were persistently aggressive. A representative longitudinal study (2,190 children and their parents) and an additional study (1,372 children and adolescents) were conducted in Germany. The hypotheses of this article are that in the data can be found (a) an U-shaped course of aggressiveness for boys and girls, but on different levels, (b) a minority of persistently aggressive children and youth, (c) influences of parental temperaments, behavioral tendencies, parenting styles and the family status on the children’s aggressiveness. The results replicate roughly the “valley” of the U-shaped course of aggressiveness. Small groups of chronically aggressive children were found as well. Influences of parental temperaments and corresponding behavioral tendencies (internalizing and externalizing behavior), parenting styles (child-centered communication, use of violence) and the social status of the families on child aggressiveness confirmed the hypotheses. These processes were moderated by gender effects between mothers, fathers, daughters, and sons. In regard to the group of persistently aggressive young people prevention of aggression should start early in childhood and over the long term. Parent education should consider more the individual personalities of the parents, not only parenting styles. 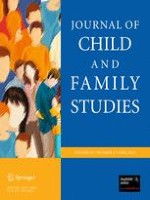 Cultural Influences on Perceptions of Health, Illness, and Disability: A Review and Focus on Autism

Parenting After a Natural Disaster: A Qualitative Study of Norwegian Families Surviving the 2004 Tsunami in Southeast Asia