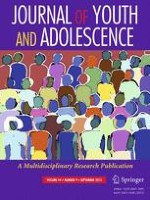 Stability and Change in Adjustment Profiles Among Chinese American Adolescents: The Role of Parenting

Understanding How Mindful Parenting May Be Linked to Mother–Adolescent Communication