We report findings from a pilot intervention that trained parents to be “friendship coaches” for their children with Attention-Deficit/Hyperactivity Disorder (ADHD). Parents of 62 children with ADHD (ages 6–10; 68% male) were randomly assigned to receive the parental friendship coaching (PFC) intervention, or to be in a no-treatment control group. Families of 62 children without ADHD were included as normative comparisons. PFC was administered in eight, 90-minute sessions to parents; there was no child treatment component. Parents were taught to arrange a social context in which their children were optimally likely to develop good peer relationships. Receipt of PFC predicted improvements in children’s social skills and friendship quality on playdates as reported by parents, and peer acceptance and rejection as reported by teachers unaware of treatment status. PFC also predicted increases in observed parental facilitation and corrective feedback, and reductions in criticism during the child’s peer interaction, which mediated the improvements in children’s peer relationships. However, no effects for PFC were found on the number of playdates hosted or on teacher report of child social skills. Findings lend initial support to a treatment model that targets parental behaviors to address children’s peer problems.
vorige artikel Parental Influence on Children with Attention-Deficit/Hyperactivity Disorder: I. Relationships Between Parent Behaviors and Child Peer Status
volgende artikel Longitudinal Associations Between Perceived Parent-Child Relationship Quality and Depressive Symptoms in Adolescence 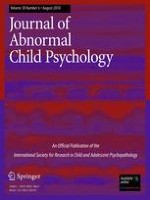