In this study, parent history of bullying was examined in terms of general involvement with bullying, specific types of bullying experienced, level of hurtfulness associated with the experience, and when bullying occurred. Parent current views, levels of concern, and strategies used to cope with bullying were also evaluated. Finally, the aforementioned constructs were analyzed for existing predictive relationships. Two-hundred-sixty parents from a public school district in the Northeast completed an online survey. Results revealed that 90.3 % of parents reported seeing and/or engaging in bullying during their youth. Few parents reported involvement as a bully, but comparable numbers of participants indicated being victimized or acting as a bystander. Additional findings suggest that a parent’s historical involvement with bullying was predictive of some of their current views, level of concern, and strategies implemented in association with bullying. Future research should attempt to account for the remaining variance among these variables. Implications for parents and school personnel are described, with recommendations for the increase of involvement by parents in anti-bullying initiatives.
vorige artikel Challenges Faced by Military Families: Perceptions of United States Marine Corps School Liaisons
volgende artikel The Role of Maternal Illness Perceptions in Family Functioning in Adolescent Girls with Anorexia Nervosa 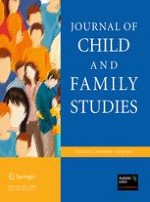 The Effectiveness of Group Parent–Child Interaction Therapy with Community Families