Cognitive dysfunction is a common concern for children with brain tumors (BTs) or those receiving central nervous system (CNS) toxic cancer treatments. Perceived cognitive function (PCF) is an economical screening that may be used to trigger full, formal cognitive testing. We assessed the potential clinical utility of PCF by comparing parent-reported scores for children with cancer with scores from the general US population.

Children (n = 515; mean age = 13.5 years; 57.0 % male) and one of their parents were recruited from pediatric oncology clinics. Most children (53.3 %) had a diagnosis of CNS tumor with an average time since diagnosis of 5.6 years. PCF was evaluated using the pediatric PCF item bank (pedsPCF), which was developed and normed on a sample drawn from the US general pediatric population. Children also completed computer-based neuropsychological tests. We tested relationships between PCF and clinical variables. Differential item functioning (DIF) was used to evaluate measurement bias between the samples.

No item showed DIF, supporting the use of pedsPCF in the cancer sample. PedsPCF differentiated children with (vs. without) a BT, p < 0.01, and groups defined by years since diagnosis, p < 0.01. It significantly (p < 0.05) correlated with computerized neuropsychological tests in 40 of 60 comparisons. Children with BTs were rated as having worse pedsPCF scores than the norm, regardless of years since diagnosis. 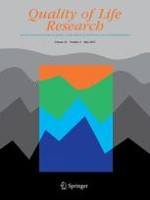 Development and evaluation of the PI-G: a three-scale measure based on the German translation of the PROMIS® pain interference item bank

Validating the Migraine-Specific Quality of Life Questionnaire v2.1 (MSQ) in Italian inpatients with chronic migraine with a history of medication overuse

The impact of weight loss on health-related quality-of-life: implications for cost-effectiveness analyses

Validation of a Quality of Life Questionnaire for Bronchiectasis: psychometric analyses of the Spanish QOL-B-V3.0