Two theoretically based parent training programs, delivered in real-world settings by the social services, were examined in this randomized controlled trial for effectiveness in reducing adolescents’ antisocial behavior and substance use. Two hundred and thirty-seven (237) adolescents in ages between 12 and 18 and their parents were assigned to one of two programs or to a wait-list control condition. The programs were the nine weekly group sessions program Comet 12–18 (Swedish Parent Management Training Program) and the six weekly ParentSteps (Swedish shortened version by Strengthening Families Program 10–14). Outcome measures were antisocial behavior, substance use, and delinquency, and psychosocial dysfunction. Data based on adolescents’ and parents’ ratings of the adolescents’ problem behavior at baseline and 6 months later were analyzed with repeated measures ANVOA, Logistic regression, and Kruskal–Wallis H test. The results showed that parents’ ratings of adolescents’ antisocial behaviors decreased significantly over time, but no time by group effect emerged. No program effects were found in the adolescents’ self-reported antisocial behavior, delinquency, or psychosocial functioning. A threefold risk of illicit drug use was found in both intervention groups. The results suggest that neither Comet nor ParentSteps had beneficial effects on adolescent’s antisocial or delinquent behavior, or on alcohol use. The only significant group difference found was a threefold risk of drug use in the intervention adolescents at follow-up, but for several reasons this finding should be interpreted with caution.
Trial registration number: ISRCTN76141538. 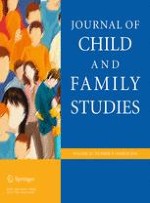 Parenting Stress and Quality of Life in Pediatric Obesity: The Mediating Role of Parenting Styles

Parent-Involved Prevention of Child Sexual Abuse: A Qualitative Exploration of Parents’ Perceptions and Practices in Beijing