To systematically review the literature published since 1999 on paediatric health-related quality of life (HRQL) in relation to parent–child agreement.

Nineteen studies were identified, including four HRQL instruments. The Pediatric Quality of Life Inventory™ (PedsQL™) was most commonly used. Differences in parent–child agreement were noted between domains for different measures. The impact of child and parent characteristics were not consistently considered; however parents of children in a nonclinical sample tended to report higher child HRQL scores than children themselves, while parents of children with health conditions tended to underestimate child HRQL.

Despite increasing numbers of studies considering children’s HRQL, information about variables contributing to parent–child agreement levels remains limited. Authors need to consistently provide evidence for reliability and validity of measures, and design studies to systematically investigate variables that impact on levels of parent–child agreement.
vorige artikel Impact of comorbid diabetes on quality of life and perception of angina pain in people with angina registered with general practitioners in the UK
volgende artikel Development and validation of the convalescence and recovery evaluation (CARE) for measuring quality of life after surgery 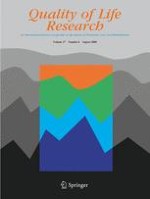 Lettter to the Editor

Health state preference scores for children with permanent childhood hearing loss: a comparative analysis of the QWB and HUI3