The IOWA Conners Rating Scale is a widely used brief measure of inattentive-impulsive-overactive (IO) and oppositional-defiant (OD) behavior in children. This study examined the psychometric properties of this measure when completed by mothers and teachers. Results of confirmatory factor analyses indicated that a three-factor solution, conforming to current DSM-IV formulations of the disruptive behavior disorders, provided a better fit to the observed data than the currently used two-factor model, in which no distinction is made between inattentive and hyperactive-impulsive behaviors. Both new and currently used scale scores had good internal consistency and test–retest reliability and showed that boys’ scores were significantly higher than girls’ scores. Results held for both mother and teacher ratings. Clinical cutoff scores were proposed and performed reasonably well to screen for ADHD and ODD. Results support the IOWA Conners as a screening measure for the disruptive behavior disorders or as a tool for monitoring treatment response.
vorige artikel Recalled Childhood Teasing among Non-Clinical, Non-College Adults
volgende artikel Development and Validation of the Clutter Image Rating 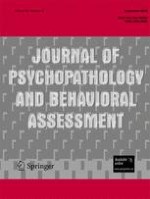 Development and Validation of the Clutter Image Rating

Combining Exposure and Pharmacotherapy in the Treatment of Social Anxiety Disorder: A Preliminary Study of State Dependent Learning