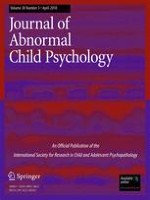 Equivalency for Father and Mother Ratings of the ADHD Symptoms

Environmental Contributions to the Stability of Antisocial Behavior over Time: Are They Shared or Non-shared?