Intact Chinese families having at least one child aged 11–16 experiencing economic disadvantage were invited to participate in the study. In case a family had more than one child in the age group of 11–16, the elder child was invited to participate in the research as he/she had higher literacy level. The concept of relative poverty was adopted, with 50 % of monthly median domestic household income according to Hong Kong Population By-census 2006 used as the poverty threshold. There were 276 families participated in the study. There was one set of invalid questionnaires, leaving 275 sets of questionnaires for analyses.

Paternal Parenting Style Scale (PPS/APPS) and Maternal Parenting Style Scale (MPS/AMPS) were used to measure the paternal and maternal demandingness and responsiveness. Based on the framework of Maccoby and Martin (1983) and parenting assessment work of Lamborn et al. (1991), Shek (1999) developed a modified version of the Paternal/Maternal Parenting Style Scale (PPS/MPS). There are two subscales: (1) Paternal/Maternal Demandingness Subscale (PDEM/MDEM) assessing demandingness of the father and mother towards the child’s behaviors; and (2) Paternal/Maternal Responsiveness Subscale (PRES/MRES) assessing responsiveness of the father and mother to the child’s behaviors. There are 7 items in the Demandingness Subscale and 13 items in the Responsiveness Subscale. The scales and subscales were found valid and reliable in the Chinese culture with internal consistency, test–retest reliability, and concurrent validity (Shek 1999, 2003). The total score of each subscale was used as an indicator of the level of parental demandingness and responsiveness, with a higher score indicating more positive parental attributes. Example of PDEM/MDEM item is “I keep pushing my child to do his/her best in whatever he/she does” and that of PRES/MRES item is “My child can count on me to help him/her out, if he/she has some kind of problem”. Reliability analyses showed that Paternal/Maternal Demandingness Subscale and Paternal/Maternal Responsiveness Subscale perceived by parents (PDEM/MDEM and PRES/MRES) and adolescents (APDEM/AMDEM and APRES/AMRES) had acceptable reliability in this study (α = .75 for PDEM, .65 for MDEM, .75 for APDEM, .72 for AMDEM, .70 for PRES, .61 for MRES, .82 for APRES and .80 for AMRES, respectively).
Chinese Paternal Control Scale (APCS) and Chinese Maternal Control Scale (AMCS) were used to measure paternal and maternal control respectively. Based on a review of the literature, Shek (2005, 2007b) developed a twelve-item Chinese Paternal/Maternal Control Scale to assess control based on indigenous Chinese cultural beliefs. Adolescents are requested to rate the degree of agreement with each item on a 4-point scale ranging from “Strongly agree” to “Strongly disagree”. Example of the item is “My father expects me to be mature (sheng xing)”. The APCS and AMCS showed internal consistency and divergent validity in previous studies (Shek 2007b). A higher total score of the measure indicates a higher level of Chinese parental control. The parental version of the scale (PCS/MCS) was modelled from adolescent’s version of Chinese Paternal/Maternal Control Scale respectively. Reliability analyses showed that PCS, MCS, APCS and AMCS had satisfactory reliability in this study (α = .85 for PCS, .87 for MCS, .87 for APCS, and .88 for AMCS, respectively).

Social Oriented Achievement Motivation Scale (SOAM) is a self-reported culture-specific measure of Chinese achievement tendencies developed by Yu and Yang (1989). It contains 30 items that measures four aspects of achievement motivation: achievement value, achievement goal, achievement related behaviors and outcome evaluation defined by significant others, groups and society (Yu 1996). Example of SOAM item is “In order not to disappoint my parents, I always try to do what they expect”. Participants were requested to rate the degree of agreement with each item on a 6-point Likert scale ranging from “Strongly agree” to “Strongly disagree”. The scale has good internal consistency, test–retest reliability, convergent validity and discriminant validity (Yu and Yang 1989). The total score of the items in the scale is an indicator of the degree of social-oriented achievement motivation, with higher scores indicating higher levels. The scale was demonstrated to have good reliability in this study (α = .94).
Chinese Positive Youth Development Scale (CPYDS) is a 90-item Chinese psychosocial measure developed by Shek et al. (2007) in measuring positive youth development. As far as resilience and psychological competence of adolescents were concerned, seven positive youth development constructs measuring the psychological competence of adolescents (resilience, cognitive competence, self-determination, self-efficacy, spirituality, beliefs in the future, and clear and positive identity) were used in this study. Example of CPYDS item is “When I face difficulty, I will not give up easily”.The CPYDS showed acceptable internal consistency, criterion-related validity, construct validity and convergent validity in previous study (Shek et al. 2007). The scale was demonstrated to have excellent reliability in this study (α = .94).

We conducted a cross-sectional survey with purposeful sampling. Families experiencing economic disadvantage were identified and recruited by social workers of various children and youth service centers, school social work services, community centers and family service centers across Hong Kong. Training and briefing sessions were organized to participating social workers by the researchers on the identification of the respondent families as well as implementation of data collection. There were totally 10 non-governmental organizations and 24 social service units involved in the study. The data collection was either arranged in the social service units or at the respondents’ homes, according to the desire of the families. During data collection, fathers, mothers and adolescents were given explanations about the purpose of the research, procedure of data collection, the rights of respondents to voluntarily participate and withdrawal from the study, as well as the use of the data in the study. Written informed consent was obtained from all participants. Fathers and mothers were requested to complete the Father Questionnaire and the Mother Questionnaire respectively which contained identical measures of parental responsiveness, demandingness, and control, whereas adolescents were requested to complete the Adolescent Questionnaire which contained measures of paternal and maternal responsiveness, paternal and maternal demandingness, paternal and maternal control, achievement motivation, and psychological competence. To ensure confidentiality, the questionnaire was completed by each participant separately. The questionnaire was administered in a self-administered format. In case the participants had difficulties comprehending the questionnaires, the questions or items were read out by researchers or trained social workers in an interview format. Parents took around 45 min to 1 h to complete the questionnaires, depending on their literacy level. Adolescents took around 35 min to complete the questionnaires. 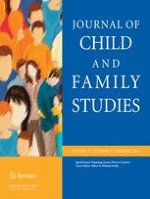 The Relationships Among Parental Anxiety, Parenting, and Children’s Anxiety: The Mediating Effects of Children’s Cognitive Vulnerabilities