The prevalence of problematic Internet use (PIU) is reportedly higher in South East Asian adolescent populations. The exacerbation of problematic adolescent behaviors has been found to associate significantly with PIU and is expected to worsen with age. Cognitive Behavioural Therapy (CBT)-integrated therapy has been shown to significantly reduce in the presence of psychological symptoms such as depression and social anxiety. The Psychological Intervention Program-Internet Use for Youth (PIP-IU-Y) is a CBT-based program designed for adolescents and comprises of a series of interpersonal skills to improve their face-to-face interaction. It focuses on taking preventative measures against Internet addiction before it develops by addressing the participant’s PIU as a negative coping style and incorporating positive psychological techniques. A total of 157 participants between the ages of 13 and 18 completed the program which consisted of eight weekly, 90 min sessions in a group format. Treatment outcomes were measured using mean change at the end of the program and 1 month post-treatment. The majority of the participants showed improvement after the eight weekly sessions of PIP-IU-Y and continued symptom maintenance at the 1 month follow-up. An overwhelming majority of participants were able to manage PIU symptoms after the intervention program, reinforcing the efficacy of the PIP-IU-Y. Not only did it addresses the PIU behaviour but also helped in reducing social anxiety and increasing social interaction. Further research could investigate treatment differences among the various subtypes of PIU (e.g., online gaming and pornography) in order to see if treatment differences exist. 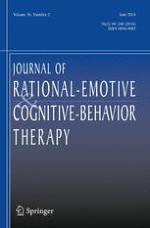 Relationship Between Miscarriage and Dysfunctional Cognitions About Trauma, Coping Mechanisms, and Posttraumatic Growth

Catastrophizing, Depression and Anxiety During Pregnancy: Relation Between Lumbopelvic Pain and Physical/Social Functioning