Rigid cognition is frequently cited as a plausible maintenance or risk factor for depression. However, most performance-based measures of cognitive rigidity associated with depression offer poor ecological validity, produce mixed findings, and afford little in the way of therapeutic application. In order to establish a more useful and relevant performance-based measure of cognitive rigidity in depression, we developed a novel task that probes a rigidity process using stimuli highly relevant to the level of construal, the thematic content, and the rhetorical mode of depressotypic thinking. The task consists of a set of narrative vignettes that contain an expectancy-violation that is incompatible with an initially-established interpretation. As hypothesized, depressive symptoms were associated with reduced ability to update interpretations. This finding was independent of the valence of the expectancy-violation (i.e., was not merely a negativity bias), and was significant after controlling for basic set-shifting ability, intelligence measures, working memory, and other potential confounds. The novel Contingent Inference Task is a promising approach that may probe a more ecologically and etiologically relevant form of cognitive rigidity in depression than other related performance-based rigidity tasks. This rigidity process may underlie the persistence of biased beliefs in depression, and represent a new therapeutic target. 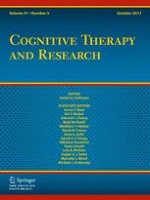 Subjective Social Status and Anxiety and Depressive Symptoms and Disorders among Low Income Latinos in Primary Care: The Role of Emotion Dysregulation

Positive and Negative Affective Forecasting in Remitted Individuals with Bipolar I Disorder, and Major Depressive Disorder, and Healthy Controls