Potential relations between gaze cueing, social use of gaze, and ability to follow line of sight were examined in children with autism and typically developing peers. Children with autism (mean age = 10 years) demonstrated intact gaze cueing. However, they preferred to follow arrows instead of eyes to infer mental state, and showed decreased accuracy in following line of sight when several visual distracters were present. Performance across tasks was not correlated for either group. Findings suggest that children with autism are less inclined to prioritize and select eyes, particularly in visually-rich environments. Gaze-following deficits may lie at the level of selective attention, rather than cueing—a possibility that can be explored with more complex and ecologically valid tasks.
vorige artikel Motor Difficulties in Autism Spectrum Disorder: Linking Symptom Severity and Postural Stability
volgende artikel The Broader Autism Phenotype in Simplex and Multiplex Families 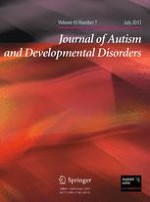 Fatigue, Stress and Coping in Mothers of Children with an Autism Spectrum Disorder

Logging On: Evaluating an Online Support Group for Parents of Children with Autism Spectrum Disorders