Children with ADHD have difficulty understanding causal connections and goal plans within stories. This study examined mediators of group differences in story narrations between children ages 7–9 with and without ADHD, including as potential mediators both the core deficits of ADHD (i.e., inattention, disinhibition, planning/working memory) as well measures of phonological processing and verbal skills. Forty-nine children with ADHD and 67 non-referred children narrated a wordless book and completed tasks assessing the core deficits of ADHD, phonological processing, and verbal skills. Results revealed that, although no shorter than those of non-referred children, the narratives of children with ADHD contained fewer elements relating to the story’s causal structure and goal plan. Deficits in sustained attention accounted for the most variance in these differences. Results have implications for understanding and ameliorating the academic problems experienced by children with ADHD. 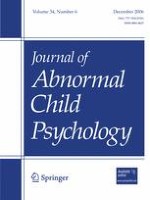 Attention Deficit-Hyperactivity Disorder, Depression, and Self- and Other-Assessments of Social Competence: A Developmental Study

Hot and Cool Aspects of Cognitive Control in Children with ADHD: Decision-Making and Inhibition