Repetitive behaviours are a relatively neglected area of study in autism. Previous research has concluded that repetitive behaviour is inversely related to ability and that it tends to increase over the preschool years. One-hundred and four children ages 24–48 months, with autism, autism spectrum disorder (ASD) or other disorders, were followed for 13 months. Twelve items from the Autism Diagnostic Interview (ADI-R) were analysed, as well as diagnostic algorithm scores. Ability was related to degree of repetitive behaviours, except for one cluster of relatively able children. ADI-R repetitive behaviour algorithm scores increased over time; however, when all 12 behaviours were considered, there was a general decrease in impact upon the child’s and family’s activities. Reasons for this decrease are discussed.
vorige artikel Language Assessment and Development in Toddlers with Autism Spectrum Disorders
volgende artikel Recognition of ‘Fortune of Others’ Emotions in Asperger Syndrome and High Functioning Autism 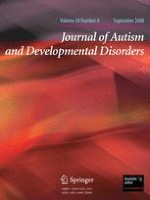 Brief Report: Reliability and Validity of the Shared Activities Questionnaire as a Measure of Middle School Students’ Attitudes toward Autism

Brief Report: Do Individuals with Autism Spectrum Disorder Think They Know Their Own Minds?

The ‘Reading the Mind in Films’ Task [Child Version]: Complex Emotion and Mental State Recognition in Children with and without Autism Spectrum Conditions

Language Assessment and Development in Toddlers with Autism Spectrum Disorders