It is commonly assumed that salient singletons generate an “attend-to-me signal” which causes suppression to develop over time, eventually preventing capture. Despite this assumption and the name “singleton suppression,” a causal link between salience and suppression has not yet been clearly established. We point out the plausibility of a simple alternative mechanism: distractors might be suppressed because they are distractors rather than targets, even when non-salient. To look for evidence of salience-based suppression, we had participants search for a target shape among distractors, which sometimes included irrelevant-colored distractors. The critical manipulation was whether the irrelevant-colored distractor was salient (a color singleton) or non-salient (three non-target colored shapes; a triplet). On 30% of trials, probe letters were presented briefly inside each shape and participants were to report those letters. Probe recall below baseline indicates suppression. Experiment 1 showed that suppression was not triggered any more strongly by salient distractors (singletons) than by non-salient distractors (triplets). Experiment 2 showed that strong suppression effects developed rapidly even in the absence of salient singletons. These findings raise the thus far neglected question of whether salience plays any role in suppression.
vorige artikel Interactive modulations between congruency sequence effects and validity sequence effects
volgende artikel The effects of real-time performance feedback and performance emphasis on the sustained attention to response task (SART) 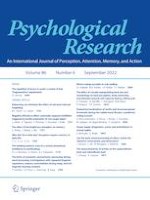 Can the early visual processing of others’ actions be related to social power and dominance?

The relations between personality, components of executive functions, and intelligence in children and young adults

Who did I lie to that day? Deception impairs memory in daily life