Identification of optimal predictors for different indicators of subjective well-being (SWB) in geriatric inpatients: (1) self-evaluated health status (SEH), (2) feeling of loneliness (FoL), and (3) severity of depression symptoms (SoDS). Investigation of the relationship between response categories of the SWB indicators and their predictors.

The data were collected retrospectively from hospital records. All 555 geriatric inpatients underwent a comprehensive geriatric assessment, including the Timed Up and Go (TUG) test. The Bayesian information criterion was applied in ordinal logistic regression models to identify optimal predictors of SEH, FoL, and SoDS among different objective factors.

After controlling for high-stress situations in the recent past, motor slowness measured with the TUG test, and a level of education were jointly selected as the best predictors of all three SWB indicators. The speed of performing the TUG test improved SEH (OR = 2.08) and decreased both FoL (OR = 0.41) and SoDS (OR = 0.41). A higher level of education improved SEH (OR = 1.05) and alleviated both FoL (OR = 0.96) and SoDS (OR = 0.92). Additionally, a higher level of SEH was positively correlated with a lower BMI, improved instrumental activities of daily living (I-ADL), and higher hemoglobin level. FoL was reinforced by the level of comorbidity, and SoDS was increased by impaired basic ADL.

Although SWB in geriatric inpatients can be explained by objective comorbidities and disabilities, the good motor function (i.e., a TUG test outcome of less than about 20 s) and a higher level of education were the general predictors that exert an independent beneficial impact on all three SWB indicators. 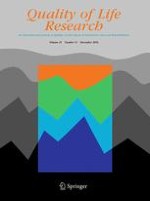 The validity of the Satisfaction with Life Scale in adolescents and a comparison with single-item life satisfaction measures: a preliminary study

QOL and sociodemographic factors among first-time parents in Japan: a multilevel analysis