High rates of alexithymia, a condition characterised by difficulties identifying and describing emotions, are frequently reported in both children and adults with autism spectrum disorder (ASD). However, the dilemma of measuring alexithymia via self-report has rarely been addressed. In this study, we compared objective and subjective measures of alexithymia in adults with ASD and typically developing adults. We found significantly higher levels of alexithymia in the ASD sample as measured by both self-report on the Toronto Alexithymia Scale (TAS-20) and by the observer rated Alexithymia Provoked Response Scale (APRQ). However, the two measures did not correlate with each other. We explore the different facets of the alexithymia construct that these two measures may be distinguishing.
vorige artikel Application of Latent Class Analysis to Identify Subgroups of Children with Autism Spectrum Disorders who Benefit from Social Skills Training
volgende artikel Autism does not Dictate Children’s Lack of Sharing in a Prosocial Choice Test 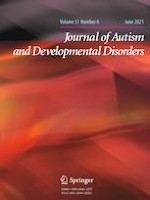 Parent Training for Youth with Autism Served in Community Settings: A Mixed-Methods Investigation Within a Community Mental Health System

Correction to: Describing the Profile of Diagnostic Features in Autistic Adults Using an Abbreviated Version of the Diagnostic Interview for Social and Communication Disorders (DISCO-Abbreviated)

Brief Report: A Randomized Controlled Trial of the Effects of RECALL (Reading to Engage Children with Autism in Language and Learning) for Preschoolers with Autism Spectrum Disorder