J. Jaspers Focks has received speaker fees or honoraria for advisory boards from Bayer Healthcare, Boehringer Ingelheim, Bristol-Meyers Squibb, Daiichi Sankyo and Pfizer; M.A. Brouwer has no conflict of interests.
Open Access This article is distributed under the terms of the Creative Commons Attribution License which permits any use, distribution, and reproduction in any medium, provided the original author(s) and the source are credited. 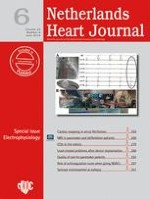 Quality of care: not hospital but operator volume of pacemaker implantations counts