Health status is an important outcome in medical care, both from the patient’s and health care provider’s perspective, and is often measured with the Short Form-36 (SF-36) questionnaire [ 1– 4]. However, an important concern in psychological assessment of clinical populations is to minimize response burden of patients, stimulating the pursuit of developing shorter questionnaires. A shorter and thus more user-friendly alternative to the SF-36 is the Short Form-12 (SF-12) [ 5]. The SF-12 measures physical and mental health by means of two summary scores; a physical component summary (PCS) and mental component summary (MCS) [ 6].
The SF-12 can be employed in multiple ways, i.e., SF-12 is often used to compare health status between two groups of patients, to identify predictors of health status, and to determine health status in a specific disease population. The predicament with both the SF-36 and SF-12 component summary scores is that they are somewhat difficult to interpret, because of the weighting of items to calculate PCS and MCS [ 5, 6]. Normative data could facilitate the interpretation of results, because these can be used to determine whether groups or individuals score above or below average for their nationality, age or sex [ 7]. While SF-36 normative data, according to age and sex, are available for the Dutch population [ 8], normative data for the SF-12 are not. Therefore, the goal of this study was to gain nationality-specific population norms for the SF-12, according to age and sex, in a large random sample of the Dutch population. In order to further validate the SF-12 (discriminative validity) and demonstrate the relevance and possible application of these Dutch norm scores, we compared health status of postmyocardial infarction (MI) patients with our newly calculated Dutch normative scores.

The sample comprised a random selection of 2,301 adults from the general Dutch population residing in the Southern provinces of The Netherlands (population of approximately 4 million). Quota sampling was applied to ensure that different age and sex groups were equally represented in the sample. This meant that equal numbers of men and women in different age groups were sampled (e.g., N of men aged 30–39 years =  N of women aged 60–69 years). Research assistants were responsible for distributing the questionnaires and were instructed to collect an equal number of questionnaires from each age and sex subcohort, without further specification of educational or income level. Participants were approached personally or by phone. After explaining the purpose of the study, participants received an informed consent form and a questionnaire, which were returned to the research assistants in closed envelopes. The questionnaires were entered into the database by others, guaranteeing anonymity. Returned questionnaires did not contain any explicit identifiers (i.e., names) but rather, were coded by number for purposes of data collection tracking. Approval for this study was obtained from a local ethics committee (protocol number 2006/1101).
Additionally, data was used from a prospective follow-up study in patients recovering from MI. Patients hospitalized for acute MI ( n = 459) were recruited between May 2003 and May 2006 from four teaching hospitals (Catharina Hospital, Eindhoven; St. Elisabeth Hospital, Tilburg; TweeSteden Hospital, Tilburg; and St. Anna Hospital, Geldrop) in the Southern provinces of The Netherlands. Inclusion criteria were age >30 years and hospitalization due to acute MI. Criteria for diagnosis of MI were troponin I levels more than twice the upper limit, with typical ischemic symptoms (e.g., chest pain) lasting for more than 10 min or electrocardiogram (ECG) evidence of ST segment elevation or new pathological Q-waves. For patients without typical angina, the day of MI onset was identified as the day during hospitalization with peak troponin I levels >1.0 and ECG evidence of ST segment elevation or new pathological Q-waves. Exclusion criteria were significant cognitive impairments (e.g., dementia) and severe medical comorbidities that increased the likelihood of early death, such as malignant cancer. All participants were approached to participate on a voluntary basis, and could withdraw from the study at any moment without implications for future treatment. The study protocol was approved by the institutional review boards of the participating hospitals (protocol number M03/1302). Written consent was obtained from all study participants.

People are, in general, very capable in determining the presence of depression, as a single question (e.g., “Are you depressed?”) was found to predict the presence of major depressive disorder very well [ 9]. Likewise, we obtained information on clinically diagnosed anxiety and depression in the general Dutch population by the following question in our questionnaire; “Did a doctor/medical specialist diagnose you with one of the following conditions?” This was followed by a list that included both anxiety disorder as well as depression.
In post-MI patients, the World Health Organization-authorized Dutch version of the Composite International Diagnostic Interview (CIDI) [ 10, 11], a fully structured diagnostic interview, was used 3 months post-MI, to determine lifetime diagnoses of major depressive disorder and anxiety disorder (consisting of panic disorder, social phobia, and/or generalized anxiety disorder). These disorders were assessed using the definitions and criteria of Diagnostic and Statistical Manual of Mental Disorders (DSM-IV) [ 12]. The CIDI has acceptable interrater and test–retest reliability for most nonpsychotic diagnoses, including major depressive disorder [ 13, 14].

In order to provide a shorter alternative to the SF-36, the SF-12 health survey was developed in 1994 [ 15] in the USA, and was purposely designed for large-scale measurements for which the SF-36 was too lengthy. The SF-12 contains 12 items derived from the SF-36, including one or two items from each of the eight SF-36 subscales (physical functioning, role limitations due to physical health, bodily pain, general health perceptions, vitality, social functioning, role limitations due to emotional problems, and mental health) [ 8]. These 12 items are used to construct the physical component summary (PCS) and the mental component summary (MCS) [ 15].
In this study, health status was assessed by version 1 of the Dutch SF-36 questionnaire (in both the norm and post-MI population), which was used to calculate SF-12 component summary scores [ 5]. Internal consistency reliability coefficients have been reported for each SF-36 subscale, ranging from 0.62 to 0.96 with a median of 0.80 [ 16]. Test–retest reliability of the SF-36 ranges from 0.43 to 0.90 with a median of 0.64 after 6 months in the general population [ 16]. In post-MI patients, health status was assessed 3 months post-MI by means of the SF-36.

PCS and MCS scores are essentially summations of the weighted domain scores. To obtain PCS and MCS scores, a dedicated procedure was used, described in the SF-36 summary scales manual [ 18]. The domain scores were first standardized, and then principle components analysis (PCA) was employed to obtain the domain weights needed to construct PCS and MCS. More specifically, the eight domains were factor-analyzed twice. Once using the standardized approach, orthogonal rotation (varimax), which by definition assumes factors to be uncorrelated, and once using an approach, oblique rotation (promax), which by definition allows factors to be correlated. The SF-36 summary measures manual [ 18] and various papers show that, when using the orthogonal method, the mental and physical component summaries demonstrate low to very low empirical correlations [ 19, 20]. Papers that have used the oblique rotation method have reported high correlations between the mental and physical component summary scores [ 15, 21– 23]. The reason for employing orthogonal rotation, as stated in the SF-36 manual, was a more straightforward interpretation of each component, driven by the goal of testing the construct validity of the SF-36. The use of oblique rotation in this and previous papers on the other hand had different reasons, in that it was based on theoretical arguments about the a priori knowledge of the relation between mental and physical health. We decided therefore to analyze the data twice because of the apparent discrepancy between the manual guidelines advocating orthogonal rotation for their purposes, and the observations from the literature that mental and physical health in fact are related [ 15, 21– 23]. The domain weights (resulting from orthogonal and oblique rotation of the eight SF-36 subscales) are presented in Table  1, where a comparison is made between the new Dutch weights and the gold-standard US weights (adapted from [ 24]). Note that the US weights were obtained from PCA using orthogonal rotation (varimax). The observable differences in Table  1 are largely due to the difference in rotation. When we applied an orthogonal rotation, despite factors being correlated, our Dutch weights resembled US weights closely. Additionally, the negative loadings largely disappear in case of oblique rotation, removing the negative effect of better mental health on physical health and vice versa, as Farivar et al. suggested [ 25].
Table 1
Factor score coefficients from the SF-36 resulting from PCA using two rotation methods
Note: US weights are the result of PCA with orthogonal rotation and those from the US SF-36 developers (adapted from [ 17, 24]). Dutch factor score coefficients were obtained from two PCA analyses, one employing orthogonal rotation (standardized method) and one using oblique rotation
The final step was to calculate raw PCS-36 and MCS-36 component scores by summing up all weighted domain scores according to the weights in the two-factor solution based on orthogonal and oblique rotation. Summary scores were then transformed so that they would have standard deviation of 10 (multiply by 10) and mean of 50 (add 50).

In accordance with the developers’ recommendations [ 6] we selected the appropriate SF-12 items from the SF-36 to reproduce the PCS-12 and MCS-12 scores in the general Dutch population and a large sample of Dutch post-MI patients. Instructions were followed to reverse item scores so that a higher score always represented better health status. Next, indicator variables were made for each answer option, and PCS-12 and MCS-12 indicator variables weights were calculated by regressing the indicator variables against, respectively, the PCS-36 and MCS-36 component summary scores. Table  2 shows the indicator variable weights for this Dutch normative population. These weights should be used to calculate SF-12 component summary scores when comparing data with this normative population. Again, we calculated the weights for each rotation method. When comparing the obtained weights with the weights published by Farivar et al. based on US data, the magnitude of the weights is comparable [ 25].
Table 2
Regression weights for calculating SF-12 PCS and MCS scores
Note: The PCS and MCS component scores are calculated by first adding all weighted answer categories, and then standardizing this score by adding the regression constant (oblique: PCS constant = 61.14074, MCS constant = 61.63188; orthogonal: PCS constant = 58.752, MCS constant = 59.289). For each question, indicator variables were constructed based on answer categories (see “Methods” section). Each row represents the answer categories per subscale. For example “PFQ2_A1” stands for answer option 1 on question 2 of the physical functioning subscale
Rotation-specific PCS-12 and MCS-12 component summary scores were finally computed by summing all weighted indicator variable scores, and standardizing them by adding the constants (specific for PCS-12 and MCS-12, respectively) from the regression analyses described above. For the validation sample of Dutch post-MI patients we used our normative population weights and constants in the calculation of PCS-12 and MCS-12 scores. When presenting our results, the extension “_uc” (which stands for uncorrelated) will indicate that summary scores were derived from orthogonal rotation PCA.

Confirmation of the relation between SF-12 and SF-36

We would like to thank Dr. Elisabeth J. Martens for providing us with the data on post-MI patients. We wish to thank Dr. Frans Pouwer for his advice on some statistical procedures. Furthermore, we thank all participants for their participation in this study. 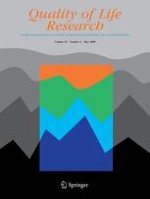 In reply to Berger “don’t test for baseline imbalances unless they are known to be present?”

Having a fit: impact of number of items and distribution of data on traditional criteria for assessing IRT’s unidimensionality assumption

Do not test for baseline imbalances unless they are known to be present?

Continence specialists use of quality of life information in routine practice: a national survey of practitioners