The purpose of this study was to understand the trajectories of nonsuicidal self-injury (NSSI) and suicide plans (SP) in the 90 days prior to inpatient hospitalization, understand the role of NSSI and SP in predicting suicide attempts (SA) on a given day, and to test the interaction between NSSI and SP in predicting same-day SA. Participants included 69 adolescents (77% female, 65% white, 77% Non-Hispanic/Latinx, Mage = 15.77 SDage = 1.00) from an inpatient psychiatric unit. Past 90 day NSSI, SP, and SA were measured using the Columbia Suicide Severity Rating Scale and Timeline Follow Back. First, mixed effect models were conducted to assess trajectories of NSSI and SP leading up to inpatient hospitalization. The odds of NSSI remained relatively stable prior to hospitalization (OR = 1.01, 95% CI [1.00,1.02]). The odds of SP increased in the 90 days prior to hospitalization (OR = 1.04, 95% CI [1.02,1.05]) with each day associated with a 4% increase in the odds of making a SP. Second, random effect models were conducted to predict the odds of same-day SA from NSSI and SP. When adolescents endorsed either NSSI (OR = 2.99, p < .001) or a SP (OR = 77.13, p < .001) there was elevated odds of same-day SA. However, the presence of both NSSI and SP on a given day did not increase risk of SA on that same day. For this high-risk clinical sample of suicidal adolescents who drink alcohol, odds of SP increased in the days leading up to psychiatric hospitalization, but NSSI remained stable. On days when adolescents reported NSSI or SP, they had an increased odds of same-day SA. These results underscore the importance of frequent monitoring of NSSI and SP among high-risk adolescents who drink alcohol to prevent suicide attempts. 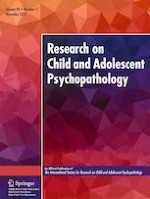 Development of Infant High-Intensity Fear and Fear Regulation from 6 to 24 Months: Maternal Sensitivity and Depressive Symptoms as Moderators