» Toegang tot de volledige tekst krijgen
The possible use of a calendar algorithm was assessed in DBC, an autistic “savant” of normal measured intelligence. Testing of all the dates in a year revealed a random distribution of errors. Re-testing DBC on the same dates one year later shows that his errors were not stable across time. Finally, DBC was able to answer “reversed” questions that cannot be solved by a classical algorithm. These findings favor a non-algorithmic retrieval of calendar information. It is proposed that multidirectional, non-hierarchical retrieval of information, and solving problems in a non-algorithmic way, are involved in savant performances. The possible role of a functional rededication of low-level perceptual systems to the processing of symbolic information in savants is discussed. 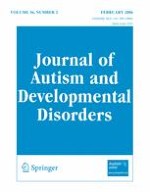 Subjective Perceptual Distortions and Visual Dysfunction in Children with Autism