In Experiment 1 participants performed a response-priming task, with either masked or unmasked primes. Prime awareness was assessed on a trial-by-trial basis. A typical conflict control pattern, with reduced priming effects following incongruent rather than congruent primes in the preceding trial was found. Yet, this pattern was obtained only when the prime information was visible and not when it was invisible. With invisible primes the effect did not occur, even when participants accidently judged the prime information correctly. Importantly, this confinement of the conflict adaptation effect to unmasked primes occurred despite identical prime processing times with and without masking−a variable that was confounded with prime awareness in previous studies. In Experiment 2, a similar data pattern was found for judgment times regarding the congruency of prime-target pairs.

Altogether, the results support the conclusion that awareness of visual primes is important for controlling conflict in visuo-motor processing. 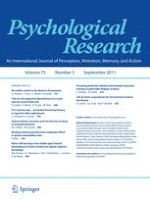 Feature absence–presence and two theories of lapses of sustained attention