The Australian Bureau of Statistics 1995 Australian National Health Survey dataset was used as the basis for the production of coefficients. There were 18,141 observations with no missing data for all eight SF-36 subscales following imputation of data items, and 17,479 observations with no missing data for the SF-12 data items. Data were analysed in LISREL V8.71. Structural equation models were fit to the data in confirmatory factor analyses producing weighted least squares estimates, which overcame anomalies found in the traditional orthogonal scoring methods.

Models with acceptable fits to the hypothesised factor structure were produced, generating factor score weighting coefficients for use with the SF-36 and SF-12 data items, to produce PCS and MCS summary scores consistent with their underlying subscale scores.

The coefficients generated will score the SF-36 summary PCS and MCS in a manner consistent with their subscales. Previous Australian studies using version 1 of SF-36 or SF-12 can re-score their summary scores using these coefficients. 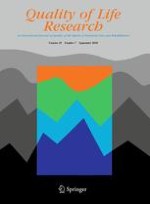 Monitoring symptoms at home: what methods would cancer patients be comfortable using?

The internal consistency and construct validity of the partners in health scale: validation of a patient rated chronic condition self-management measure

The Work Instability Scale for Rheumatoid Arthritis (RA-WIS): Does it work in osteoarthritis?