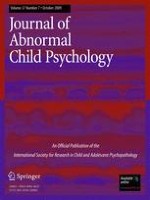 How Distinctive are ADHD and RD? Results of a Double Dissociation Study