The Predominantly Inattentive (PI) and Combined (CB) subtypes of AD/HD differ in cognitive tempo, age of onset, gender ratio, and comorbidity, yet a differentiating endophenotype has not been identified. The aim of this study was to test rigorously diagnosed PI, CB, and typical children on measures selected for their potential to reveal hypothesized differences between the subtypes in specific neurocognitive systems (anterior vs. posterior attentional systems) and processes (arousal vs. activation). Thirty-four CB and 26 PI children meeting full DSM-IV criteria for subtype both in school and at home, without confounding reading disability or emotional disorder, were enrolled along with 20 typically developing children. Neurocognitive functions measured included attention, inhibitory control, working memory, learning, and executive functions. Tasks included the Stroop, Wisconsin Card Sorting Test, Continuous Performance Test (CPT). Buschke Selective Reminding Test, ad the Tower of London (TOL), as well as instruments developed by Posner and Sternberg, and tasks assessing the impact on reaction time varying preparatory intervals and stimulus/response complexity. After co-varying for IQ, subtypes differed primarily on measures of impulsivity during tests of vigilance (CPT) and executive function (TOL), with the CB group showing greater impulsivity than both other groups. In addition, the PI group showed worse performance than CB and control groups on the WISC-III Processing Speed Index. Whether analyzed with or without an IQ co-variate, there was no support in the data for hypothesized differences between subtypes in functioning of the anterior vs. posterior attentional systems, nor in involvement of arousal vs. activation processes. The results indicate that the PI and CB subtypes are best differentiated by ratings, observations and tests of cognitive tempo and behavioral impulsivity. Neuropsychological methods have yet to identify critical neurological substrates of these differences.
vorige artikel Marital Conflict and Risk for Child Maladjustment over Time: Skin Conductance Level Reactivity as a Vulnerability Factor
volgende artikel Attention-Deficit/Hyperactivity Disorder and Behavioral Inhibition: A Meta-Analytic Review of the Stop-signal Paradigm 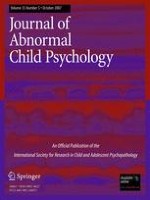