Network analytic techniques examine how items used to measure underlying constructs are related to one another and identify core characteristics. While many studies have examined the covariance of callous-unemotional (CU) traits or features and conduct disorder (CD) symptoms, the inter-item relations of these constructs and the core characteristics of the CU construct are unclear. The present study aimed to examine the network connectivity of, and between, CU features and CD symptoms. We also examined both parent-reports and youth self-reports and gender differences. CU features and CD symptoms were rated by parents (n = 814; 74% mothers; age 23–73, M age = 43.86, SD = 8.13) and their child (n = 608; 57% female; age 7–19, M age = 13.98, SD = 2.36). Network plots depicted greater connectivity (i.e., density and weights) for CU features relative to CD symptoms across both informants. However, youth-reported CU features and CD symptoms were less densely connected than parent-reports. Items commonly comprising the callousness subscale were more central and linked the two constructs together, relative to uncaring items, across informant and gender. Gender related effects indicated lower centrality for male versus female youth, and this finding was particularly evident in youth-reports. Our findings highlight relations between CU features and CD symptoms, and point to the importance of callousness items in conceptualizations of CU features among high-risk youth from both the perspective of the parent and child. We also inform understanding of gender differences in CU features for which the literature is currently limited.
vorige artikel Conditional Learning Deficits in Children with ADHD can be Reduced Through Reward Optimization and Response-Specific Reinforcement
volgende artikel Examining the Potential Mental Health Costs of Defending Victims of Bullying: a Longitudinal Analysis 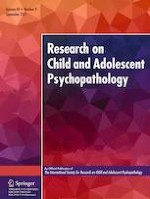