This study explores the relationships between neighborhood structural differences such as socioeconomic status (SES), income inequality, and ethnic diversity on women’s mental health in Accra, Ghana.

These findings suggest that policies and programs that improve the physical and economic conditions of deprived neighborhoods, as well as civic initiatives that improve social capital and cohesion, may be important for promoting collective actions and improving health outcomes in urban settings like Accra. 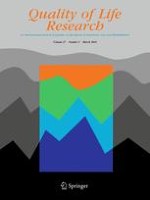 Quality of life at 6 years after occupational injury