Latinx youth living in the United States reside in a myriad of cultural and neighborhood contexts, yet little is known regarding how cultural values influence behavior problems across neighborhood contexts. Using a person–environment fit framework, the present study explored the degree to which youth cultural values were associated with their externalizing problems, and the degree to which this association was shaped by their neighborhood’s socioeconomic status (SES), and Latinx and immigrant concentration. The sample comprised of 998 Latinx youth (Female = 54.2%), ages 10 to 14 years old (Mage = 11.8), from three large United States metropolitan areas. Multilevel modeling methods indicated that increased fit between youth cultural values and neighborhood Latinx and immigrant concentration was associated with fewer externalizing problems, but only in higher SES neighborhoods. The results support the importance of studying social determinants of Latinx youth behavioral health, and provide implications for both neighborhood-level and individual-level prevention and intervention programming.
vorige artikel “They Think that I Should Defend”: Effects of Peer and Teacher Injunctive Norms on Defending Victimized Classmates in Early Adolescents
volgende artikel Reciprocal Relationships between Trajectories of Depressive Symptoms and Screen Media Use during Adolescence 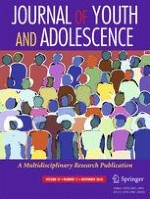 The Effects of Neighborhood Context on Exposure to Adverse Childhood Experiences (ACE) Among Adolescents Involved in the Juvenile Justice System: Latent Classes and Contextual Effects

“They Think that I Should Defend”: Effects of Peer and Teacher Injunctive Norms on Defending Victimized Classmates in Early Adolescents

Stability and Change of Bullying Roles in the Traditional and Virtual Contexts: A Three-Wave Longitudinal Study in Chinese Early Adolescents