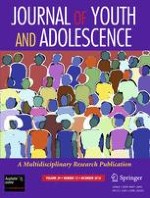 The Relationship of Parental Control to Youth Adjustment: Do Youths’ Feelings About Their Parents Play a Role?

Financial Socialization of First-year College Students: The Roles of Parents, Work, and Education

Invited Commentary: Why Body Image is Important to Adolescent Development

Relationships Between Family Connectedness and Body Satisfaction: A Longitudinal Study of Adolescent Girls and Boys

Revisiting Parental Monitoring: Evidence that Parental Solicitation Can be Effective When Needed Most