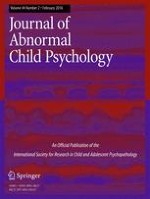 Response Inhibition, Peer Preference and Victimization, and Self-Harm: Longitudinal Associations in Young Adult Women with and without ADHD

The Social, Behavioral, and Emotional Correlates of Bullying and Victimization in a School-Based Sample