Post traumatic cognitions (PTCs) are important determinants of post traumatic stress symptoms (PTS symptoms). We tested whether risk factors of PTS symptoms (trauma, demographics, social and family-related factors) predict PTCs and whether PTCs mediate the association between risk factors and PTS symptoms among war-affected children. The participants were 240 Palestinian children 10–12 years old, half boys and half girls, and their parents. Children reported about psychological maltreatment, sibling and peer relations, war trauma, PTCs, PTS symptoms, and depression. Parents reported about their socioeconomic status and their own PTS symptoms. The associations between the variables were estimated in structural equation models. In models which included all the variables, PTCs were predicted by and mediated the effects of psychological maltreatment, war trauma, sibling conflict, and peer unpopularity on PTS symptoms. Other predictors had statistically non-significant effects. Psychological maltreatment had the largest indirect effect (b* = 0.29, p = 0.002) and the indirect effects of war trauma (b* = 0.10, p = 0.045), sibling conflict (b* = 0.10, p = 0.045), and peer unpopularity (b* = 0.10, p = 0.094) were lower and about the same size. Age-salient social relationships are potentially important in the development of both PTCs and PTS symptoms among preadolescents. Furthermore, PTCs mediate the effects of the risk factors of PTS symptoms. The causality of the associations among the variables is not established but it could be studied in the future with interventions which improve the negative aspects of traumatized children’s important social relationships. 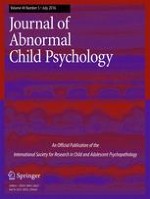 The Relationship Between Father Involvement and Child Problem Behaviour in Intact Families: A 7-Year Cross-Lagged Study