Alcohol abuse among college students continues to be a large societal problem in need of further study. This project investigated the influence of different types of negative repetitive thought (NRT) on alcohol use and binging behavior among undergraduates. Specifically, angry rumination, depressive rumination, co-rumination, and worry were examined. An initial exploratory factor analysis supported the distinctiveness of these four forms of NRT. With respect to quantity of weekly drinking, worry was significantly associated with less alcohol use among drinkers whereas angry rumination was associated with greater weekly usage. The effect of co-rumination was moderated by sex such that higher levels of co-rumination was associated with less weekly drinking in men but more weekly drinking in women. The tendency to co-ruminate was also significantly associated with of being a binge drinker, and demonstrated similar gender moderation. Higher levels of worry were associated with less binge drinking among women, but no association between worry and binging was present among men. The implications for these findings in the study of NRT and alcohol use are discussed.
vorige artikel Cognitive Style Moderates Attention to Attribution-Relevant Stimuli
volgende artikel Preliminary Evidence that Anxiety is Associated with Accelerated Response in Cognitive Therapy for Depression 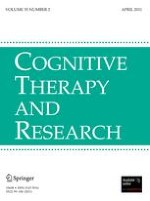 Obsessive Beliefs and Dimensions of Obsessive-Compulsive Disorder: An Examination of Specific Associations

The Predictors and Contents of Post-Event Processing in Social Anxiety