The wraparound process has been promoted in the children’s services field as a mechanism to achieve collaborative service planning and delivery for families of young people with complex emotional and behavioral needs that span multiple agencies. We compared results of two surveys of state children’s mental health directors, completed in 1998 and 2008, to derive estimates of the extent of wraparound implementation in the United States and to better understand trends in how wraparound has been implemented and supported over time. Results from 2008 found that 88% of states reported having some type of wraparound program that conformed to the definition and provided an estimate of 100,000 children and families served via wraparound in that year. Between 1998 and 2008, states reported increased application of wraparound standards, a greater number of agencies involved in wraparound initiatives, and more formal evaluations of wraparound initiatives. Results provide substantiation of the widespread implementation of wraparound implementation in the United States, and evidence that the model is becoming more consistently supported by formal implementation structures over time.
vorige artikel Implementation Research and Wraparound Literature: Building a Research Agenda
volgende artikel Connecting the Dots: Stages of Implementation, Wraparound Fidelity and Youth Outcomes 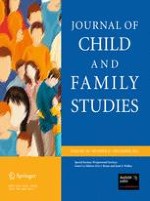 The Impact of Child and Family Team Composition on Wraparound Fidelity: Examining Links Between Team Attendance Consistency and Functioning

Is Maternal Fatigue Mediating the Relationship Between Maternal Depression and Child Outcomes?

Integrating Wraparound into a Schoolwide System of Positive Behavior Supports

Parental Strategies for Knowledge of Adolescents’ Friends: Distinct from Monitoring?

Maternal Affective Disorder and Children’s Representation of Their Families