» Naar de samenvatting
A 52-year-old female was admitted after an out-of-hospital cardiac arrest due to ventricular fibrillation. Cardiological evaluation revealed non-ischaemic dilated cardiomyopathy (DCM). Cardiac MRI showed a severely dilated left ventricle with an ejection fraction of 17% (Fig.  1a). Normal coronary arteries were seen on the coronary angiogram. Her medical history revealed cataracts at the age of 48 years and diminished strength in her hands. Two of her sisters had been diagnosed with myotonic dystrophy (MD). Their children had a more severe phenotype including clubfeet and developmental delay (Fig.  1b). Analysis of 53 cardiomyopathy-related genes using next-generation sequencing did not reveal any pathogenic variants. Analysis of the (CTG) n repeat in the DMPK gene ( n > 150) revealed a heterozygous expansion, confirming the diagnosis of MD in our patient. A CTG repeat length between 100 and 1,000 is associated with the classic type of MD with muscle weakness and wasting, myotonia, cataracts and cardiac conduction abnormalities. DCM and ventricular fibrillation are previously reported but rare features of MD [ 1‐ 5].
×

M. Isrie, L. Wong, J.M. van Hagen and A.C. Houweling declare that they have no competing interests.
Open Access This article is distributed under the terms of the Creative Commons Attribution 4.0 International License ( http://​creativecommons.​org/​licenses/​by/​4.​0/​), which permits unrestricted use, distribution, and reproduction in any medium, provided you give appropriate credit to the original author(s) and the source, provide a link to the Creative Commons license, and indicate if changes were made. 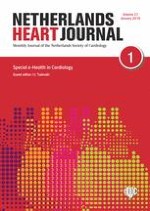 Telemedicine in heart failure—more than nice to have?

Mobile health: solution or a threat?

e-Health in cardiology: How to cure the infarcted innovation implementation