As this study focused on the entrance to secondary education, participants were 1144 first grade students (50% boys), aged between 11.1 and 15.6 at Time 1 ( Mean 12.7, SD = 0.47). A total of 97% of participants were born in the Netherlands (as were 87% of their fathers and 88% of their mothers). Data stem from the SNARE (Social Network Analysis of Risk behavior in Early adolescence) study; a longitudinal project on the social development of early adolescents with a specific focus on adolescents’ involvement in risk behavior. Two secondary schools were asked and were willing to participate: one in the middle and one in the north of the Netherlands. Subsequently, all first- and second-year secondary school students (i.e., similar to 7th–8th grades in the US) from these schools were approached for enrollment in SNARE (2011–2012). All eligible students received an information letter for themselves and their parents, inviting them to participate in the study. If students wished to refrain from participation, or if their parents disagreed with their children’s participation, they were requested to send a note or email within 10 days to this effect. One year later (2012–2013), all new first year students were again approached for participation in the study. In total, 1826 students were approached for this study, of which 40 students (2.2%) refused to participate for several reasons, for example, the parent and/or adolescent had no interest, the adolescent was dyslectic, or it was too time consuming. A total of 1786 students participated in SNARE ( M age Time 1 = 12.91 years, SD = 0.70, 50.1% male, 83.9% Dutch). Thus there were four samples, two cohorts coming from two schools (see also Dijkstra et al. 2015; Franken et al. 2015).
In September 2011, just when participants entered the first or second year of secondary school, we started with a pre-assessment. Subsequently, in 2012, all new first-year students also completed a pre-assessment. After the pre-assessment there were follow-up regular measurement waves in October (Time 1), December (Time 2), and April (Time 3). After 2 years (2011–2013), data collection was continued for another 2 years among the participating students.
During the assessments, a teacher and research assistants were present. The research assistant gave a brief introduction followed by the students filling in a questionnaire on the computer during class. The questionnaire contained both self-reports as well as peer nominations (participants could indicate who their friends were). Data were collected via the questionnaires using CS socio software ( www.​sociometric-study.​com). This software was particularly developed for this study and allowed students to fill in sociometric questions. The assessment of the questionnaires took place during regular school hours within approximately 45 min. The students that were absent were, if possible, assessed within a month. The anonymity and privacy of the students were warranted. The study was approved by the Internal Review Board of one of the participating universities.

Participants were asked to name their best friends. Participants could nominate friends in their own class and, in addition, friends from their grade. Grade networks were used for the current analyses. Thus, there were four networks (i.e., two schools and two cohorts per school).

Participants were asked to indicate their music preferences. Fifteen music types were presented: international popular, Dutch popular, rock, alternative rock, heavy metal, gothic, rap/hip-hop, RnB, reggae, house/dance/trance, techno/dubstep, hardhouse, classical music, jazz, and folk. For each type of music, participants could tick a box, indicating their preference for this type of music. Thus for each music type participants had a score of either zero, indicating no preference, or one, indicating a preference for this type of music. A factor analysis (principle component analyses with oblimin rotation) revealed that 12 of these items can be meaningfully integrated into a five factor structure (see Table  1) similar to ones that that have been found in earlier studies on the structure of music preferences (e.g., Mulder et al. 2007; Rentfrow et al. 2011; Ter Bogt et al. 2012). On the basis of these results we created five overall music preference scores: popular, rock, urban, dance and highbrow music. Three less popular or less well known music types were not included in the current analyses: folk, reggae, and Dutch popular music.
Table 1
Exploratory factor analysis of music preferences at Time 1, with oblimin rotation
Note. Loadings greater than (−) 0.32 are displayed. Kaiser-Meyer-Olkin Measure of Sampling Adequacy = 0.75. Bartlett’s Test of Sphericity: Chi 2 1296.22 (66),  p < 0.01

Over the whole sample, there were significant and positive correlations ( p’s  < 0 .01) between preferences for dance ( r = 0.24) and urban ( r = 0.09) music, and externalizing behavior. The correlations for highbrow ( r = −0.10) and popular ( r = −0.09) music with externalizing behavior were negative and significant ( p’s  < 0 .01). A preference for rock music ( r = 0.03) was not correlated with engagement in externalizing behavior.
Table  2 lists descriptive statistics for each of the four networks examined in this study. Results at Time 1 suggested that all four networks did not differ in age, and that there were only some small differences in gender distribution, and externalizing behavior. Table  2 also includes network characteristics for each cohort. Per network and measurement moment, there were between 1 and 5% absent participants during the assessments. The Jaccard index indicates the relative stability of each friendship network over time. The Jaccard indices were between 0.44 and 0.48, well within the desired range for longitudinal social network analyses (Veenstra et al. 2013). This indicates that friendships are relatively stable, while some changes in friendships occur. Therefore, it is possible to study changes in both friendship connections (making and losing friends) and to study changes in behavior among stable friends.
Table 2
Descriptive statistics of friendship networks for school 1 (cohort 1 N = 432, cohort 2 N = 390) and school 2 (cohort 1 N = 186, cohort 2 N = 136), Time 1–Time 3
Note. *One-way ANOVA between group differences at p  < 0.05. Within each time point (i.e., row), Mean scores with different superscripts differ significantly from each other at p  < 0.05; calculated with a post-hoc Tukey Honestly Significant Difference test

We are grateful to all adolescents, their parents and teachers who participated in this research and to everyone who worked on this project and made it possible.

The authors declare that they have no competing interest.

The study was approved by the Internal Review Board of one of the participating universities. All eligible students received an information letter for themselves and their parents, in which they were asked to participate. If students wished to refrain from participation, or if their parents disagreed with their children’s participation, they were requested to send a reply card or email within ten days.

All eligible students received an information letter for themselves and their parents, in which they were asked to participate. If students wished to refrain from participation, or if their parents disagreed with their children’s participation, they were requested to send a reply card or email within 10 days.
This article is distributed under the terms of the Creative     Commons      Attribution       4.0      International      License ( http://​creativecommons.​org/​licenses/​by/​4.​0/​), which permits unrestricted use, distribution, and reproduction in any medium, provided you give appropriate credit to the original author(s) and the source, provide a link to the Creative Commons license, and indicate if changes were made. 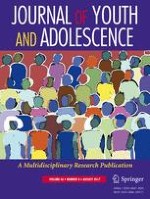