The multiple object tracking (MOT) paradigm has proven its value in targeting a number of aspects of visual cognition. This study used MOT to investigate the effect of object-based grouping, both in children with and without autism spectrum disorder (ASD). A modified MOT task was administered to both groups, who had to track and distinguish four targets that moved randomly amongst four distracters, irrespective of the grouping condition. No group difference was revealed between children with and without ASD: both showed adequate MOT abilities and a similar amount of grouping interference. Implications of the current result are considered for previous MOT studies, the developmental trajectory of perceptual grouping, and the idea of heightened sensitivity to task characteristics in ASD.
vorige artikel Local Versus Global Processing in Autism: Special Section Editorial
volgende artikel Autistic Traits and Enhanced Perceptual Representation of Pitch and Time 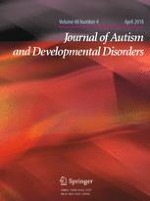 Autistic Traits and Enhanced Perceptual Representation of Pitch and Time

Examining the Links Between Challenging Behaviors in Youth with ASD and Parental Stress, Mental Health, and Involvement: Applying an Adaptation of the Family Stress Model to Families of Youth with ASD