» Toegang tot de volledige tekst krijgen
Belangrijke opmerkingen
This article was presented in March 2010 as a poster at the annual conference of the Society for Research on Adolescence in Philadelphia, PA.

Multiracial youth are thought to be more vulnerable to peer-related risk factors than are single-race youth. However, there have been surprisingly few well-designed studies on this topic. This study empirically investigated the extent to which multiracial youth are at higher risk for peer influenced problem behavior. Data are from a representative and longitudinal sample of youth from Washington State (N = 1,760, mean age = 14.13, 50.9% girls). Of those in the sample, 225 youth self-identified as multiracial (12.8%), 1,259 as White (71.5%), 152 as Latino (8.6%), and 124 as Asian American (7.1%). Results show that multiracial youth have higher rates of violence and alcohol use than Whites and more marijuana use than Asian Americans. Higher levels of socioeconomic disadvantage and single-parent family status partly explained the higher rates of problem behaviors among multiracial youth. Peer risk factors of substance-using or antisocial friends were higher for multiracial youth than Whites, even after socioeconomic variables were accounted for, demonstrating a higher rate of peer risks among multiracial youth. The number of substance-using friends was the most consistently significant correlate and predictor of problems and was highest among multiracial youth. However, interaction tests did not provide consistent evidence of a stronger influence of peer risks among multiracial youth. Findings underscore the importance of a differentiated understanding of vulnerability in order to better target prevention and intervention efforts as well as the need for further research that can help identify and explain the unique experiences and vulnerabilities of multiracial youth. 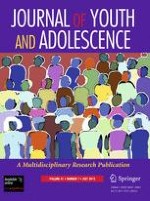 Perceived Ethnic Stigma Across the Transition to College

The Cultivation of a Prosocial Value Orientation Through Community Service: An Examination of Organizational Context, Social Facilitation, and Duration

Growing Up Too Soon? Parentification Among Immigrant and Native Adolescents in Germany