Recruitment was conducted in a fertility clinic at an academic medical center in the Midwest. Women were eligible if they were seeking fertility treatment and able to read and write in English. Women who were visiting the clinic for the first time or who were seeking artificial insemination by a sperm donor and did not have an infertility diagnosis were not recruited. Of 112 women introduced to the study, 97 elected to participate, 10 declined, and five consented but did not complete the initial questionnaire (T1), representing 87% participation. An independent samples t-test revealed no significant difference in the age of participants ( M = 33.13 years, SD = 5.57) and decliners ( M = 29.80 years, SD = 5.90; t [103] = 1.79, P > .05). Fifty-eight women completed an additional assessment 6 months later (T2). Four participants were lost to follow up, and the remaining participants did not return the assessment materials. Of the women who completed T2, 11 had become pregnant since T1. The 47 who were not pregnant were retained in analyses. No significant differences emerged on demographic or fertility-related variables between completers and non-completers.
The 97 participants had a mean educational level of 15.15 years (SD = 2.4); 70% were Caucasian, 19% African American, 4% Latina, 3% Asian American, 1% Native American, and 3% were of other ethnic backgrounds. Most women (90%) were married, for an average of 6.50 years (SD = 4.28), and 64% had no children. Most women (71%) reported that they had been diagnosed with a fertility problem, 8% reported that their partner had been diagnosed, 7% reported that both they and their partner had been diagnosed, and 14% reported infertility of unknown cause. On average, participants had been trying to get pregnant for more than 2 years ( M = 26.72 months; SD = 33.90; range = 0–240) prior to seeking fertility treatment. The average duration of fertility treatment was 18.06 months (SD = 21.36; range = 0–132). Fifty-one percent of the women had taken Clomid for at least one cycle, 12% had intrauterine insemination (IUI), 27% had IUI with Clomid, 21% had IUI with an injectable fertility medication, 16% had in vitro fertilization (IVF), and 10% had other infertility treatment. Thirty-four percent were in the diagnostic phase and had not yet undergone treatment procedures. Sixteen percent reported having at least one miscarriage before receiving fertility treatment; 15% reported miscarrying at least once during treatment.

Study procedures were approved by the Institutional Review Board of the University of Kansas Medical Center. Patients meeting eligibility criteria were approached in the fertility clinic waiting room by the second author (JTW) and invited to participate in a study examining “how patients who have been diagnosed with fertility problems learn to deal with that experience.” The two clinic physicians provided prior approval for their patients to be approached, and they were unaware of whether patients agreed to participate. After providing written informed consent, participants completed questionnaires individually in a quiet room in the clinic. Six months later, follow-up questionnaires were completed by mail.

Goal adjustment in the context of infertility was assessed with an author-constructed self-report measure. Nineteen items were generated by the second author to reflect goal disengagement or engagement abilities (Table  1). Participants were instructed, “Please turn your attention to your goal of becoming a parent. Answer the following questions with that goal in mind. If you already have children, think about your current goal of having a child.” Items were answered on a 1–7 scale from completely disagree to completely agree. Although items are specific to infertility, the scale was designed so that it can be adapted to other populations. The 19 items administered at study entry were submitted to a principal axis factor analysis with Promax rotation to allow the factors to be correlated. A three-factor solution best characterized the data, accounting for 56% of the variance, as indicated by three criteria: (1) eigenvalues greater than 1.0, (2) relatively high factor loadings of items on their respective factors (>.50), and (3) relatively low loadings on the other factors (<.30). Accounting for 36% of the variance, the first factor contained nine items that reflect goal disengagement ability. Comprised of three items accounting for 13% of the variance, the second factor reflected new goal pursuit in direct response to infertility. The third factor contained three items reflecting alternative goal pursuit unprompted by infertility and accounted for 7% of the variance. Four items did not load on any single factor. Items were averaged to construct the resulting three scales, with internal consistency estimates for the three scales at α = .92 for goal disengagement, .88 for goal engagement in direct response to infertility, and .89 for general goal engagement. The correlation of the two goal engagement scales was r = .35 ( P < .0005), and goal disengagement ability correlated with engagement in direct response to infertility at r = .41, P < .0001 and with general goal engagement at r = .15, P > .10.
Table 1
Promax rotated factor loadings from the principal axis factor analysis
Standardized regression coefficients are reported. Four items with low factor loadings are not included
aReverse-scored
Goal blockage was assessed by a self-report item (“How blocked do you feel in your goal of becoming a parent?” answered on a 1–7 scale from not blocked to completely blocked) termed Perceived Goal Blockage, and by the total number of unsuccessful treatment cycles the participant had undergone, termed Actual Goal Blockage.
Depressive symptoms were assessed with the 20-item Center for Epidemiologic Studies Depression Scale (CES-D; Radloff 1977, 1991). This scale has good internal consistency with both clinical and general adult populations (α of .90 and .85, respectively; Radloff 1991).
Infertility- specific thought intrusion was assessed using the 7-item Intrusion subscale of the Impact of Event Scale (Horowitz et al. 1979). Participants were asked how frequently each item was true for them with regard to their experience of fertility problems during the past week (0 = Not at all; 5 = Often). A sample item is, “Other things kept making me think about it.” This scale has adequate internal consistency (α = .78 for the Intrusion subscale) and high test–retest reliability ( r = .87; Horowitz et al. 1979).
Positive states of mind were assessed using the six-item Positive States of Mind Scale (PSOM; Horowitz et al. 1988), which taps current life satisfaction and ability to experience positive states such as productivity, pleasure and connection to others. The scale has a Cronbach α of .77, is positively correlated with the Vigor subscale of the Profile of Mood States and is negatively correlated with negative mood (Horowitz et al. 1988).

Psychological variables as predictors of change in goal adjustment abilities 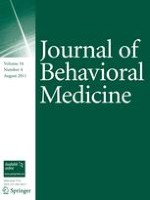 Unpacking the racial disparity in HIV rates: the effect of race on risky sexual behavior among Black young men who have sex with men (YMSM)

Relationship satisfaction in couples confronted with colorectal cancer: the interplay of past and current spousal support