It is unclear which aspects of empathy are shared and which are uniquely affected in autism spectrum disorder (ASD) and conduct disorder (CD) as are the neurobiological correlates of these empathy impairments. The aim of this systematic review is to describe the overlap and specificity of motor, emotional, and cognitive aspects of empathy in children and adolescents with ASD or CD. Motor and cognitive empathy impairments are found in both ASD and CD, yet the specificity seems to differ. In ASD facial mimicry and emotion recognition may be impaired for all basic emotions, whereas in CD this is only the case for negative emotions. Emotional empathy and the role of attention to the eyes therein need further investigation. We hypothesize that impaired motor and cognitive empathy in both disorders are a consequence of lack of attention to the eyes. However, we hypothesize major differences in emotional empathy deficits between ASD and CD, probably due to emotional autonomic and amygdala hyper-responsivity in ASD versus hypo-responsivity in CD, both resulting in lack of attention to the eyes.
vorige artikel Negative Affect Shares Genetic and Environmental Influences with Symptoms of Childhood Internalizing and Externalizing Disorders
volgende artikel “Do You Trust Him?” Children’s Trust Beliefs and Developmental Trajectories of Aggressive Behavior in an Ethnically Diverse Sample 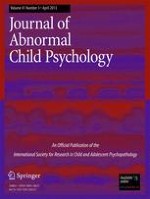