Although intensive parenting is considered a dominant ideology of child-rearing, the tenets have only recently been operationalized. The Intensive Parenting Attitudes Questionnaire (IPAQ) was designed to assess the prescriptive norms of how people should parent and includes scales assessing the ideas that parenting is fulfilling, but challenging, and should be child-centered, involve intellectual stimulation, and is best done by women. The original IPAQ refers to parents, rather than mothers or fathers specifically, and was developed and validated on both women who were and were not mothers. The current investigation was designed to determine (a) whether women hold stronger intensive parenting beliefs than men and (b) whether answers on the IPAQ would vary depending on whether the referent was a mother, a father, or a parent. Participants included 322 male and female college students who were randomly assigned to receive one of three versions of the IPAQ referring either to mother, father, or parent. A main effect for sex indicated that female students held more intensive parenting beliefs than male students. A main effect for version indicated that referring to fathers led to more intensive attitudes than referring to mothers on the Child-Centered and Fulfillment scales, but parenting was rated as more Challenging than fathering. Whether the emphasis on father involvement found in the present investigation will translate into actual paternal involvement once participants have children is discussed. 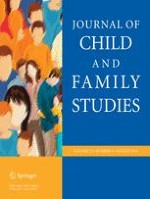 Mental Health Problems of Displaced War-Affected Adolescents in Northern Uganda: Patterns of Agreement Between Self and Caregiver Assessment

Keeping a Sound Marriage: How Couples with Children with Autism Spectrum Disorders Maintain Their Marriages

Positive Psychology and Attachment: Positive Affect as a Mediator of Developmental Outcomes