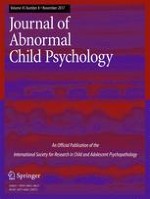 Is Poor Working Memory a Transdiagnostic Risk Factor for Psychopathology?

Neurophysiological Processing of Emotion in Children of Mothers with a History of Depression: the Moderating Role of Preschool Persistent Irritability

Attentional Bias in Children with Asthma with and without Anxiety Disorders