This prospective, longitudinal study with data collected at four time points investigated how maternal psychiatric symptoms, substance abuse and maternal intrusiveness in interaction were related to early child language skills. Three groups of mothers were recruited during pregnancy: One from residential treatment institutions for substance abuse (n = 18), one from psychiatric outpatient treatment (n = 22) and one from well-baby clinics (n = 30). Maternal substance abuse and anti-social and borderline personality traits were assessed during pregnancy, postpartum depression at 3 months, maternal intrusiveness in interaction at 12 months, and child language skills at 2 years. Results showed that the mothers in the substance abuse group had the lowest level of education, they were younger and they were more likely to be single mothers than the mothers in the two other groups. There was a significant difference in expressive language between children born to mothers with substance abuse problems and those born to comparison mothers, however not when controlling for maternal age, education and single parenthood. No group differences in receptive language skills were detected. Results further showed that maternal intrusiveness observed in mother–child interaction at 12 months was significantly related to child expressive language at 2 years, also when controlling for socio-demographic risk factors. This suggests that in addition to addressing substance abuse and psychiatric problems, there is a need for applying treatment models promoting sensitive caregiving, in order to enhance child expressive language skills. 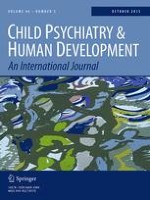 Erratum to: An Analysis of Training, Generalization, and Maintenance Effects of Primary Care Triple P for Parents of Preschool-Aged Children with Disruptive Behavior